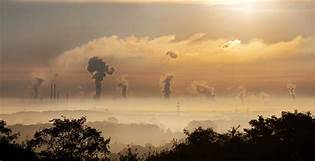 Air is polluted by pollutants such as smoke and dust. Smoke means incomplete combustion of coal and wood suspends very fine particles into the air & dust means particles of different size and irregular shapes which either is suspend or floating through the air. Both constitute about 10% of pollutants discharged in the air. Left smoke & dust there are various other causes who create pollutant ingredients in air. These are soot, aerosols, haze, mist, fumes etc. These are the visible particulate pollutants. There are fine particles, coarser particles & invisible gaseous pollutants which create to pollute the air. These are the pollutants which get mixed with the atmospheric air and do not settle down. They include gases such as carbon monoxide, carbon dioxide, sulphur dioxide, hydrogen fluoride, chlorine, oxide of nitrogen, ozone, ammonia, aldehydes, mercury vapors, hydrogen sulphides, hydrocarbons, arsines and carbonyl chlorides.

Due to some natural processes of human activities, the amount of solid wastes or concentration of gases other than oxygen increases in the air, which otherwise has fixed proportions of different gases of it. The air thus becomes polluted and this process is called air pollution. Automobiles, electrical power plants, industrial processors and heating plants are the most important fuel burning sources which create pollutants on air.

Effects of air pollution on plants: Our forest resources are greatly harmed by air-borne pollution. A number o trees in forests have got diseased or are dying out due to heavy industrialization. Sulphur dioxide cause acid rain falls over parts of the earth and reduced growth. Nitrogen Oxide makes the rain more acidic and affects the growth of the plants and trees. Like these above two causes hydrocarbons mainly include methane and ethylene. Methane causes retorted growth of plants and fruit production. Ethylene is the cause of chlorosis of floral buds and retards growth in plants. Smoke & dust settle down on the leaves and clog the stomata and form a thin layer which interfere the light absorption and thus the process of photosynthesis is disturbed.

Effects on animals: Sulphur dioxide increases the acidity of streams. In certain species of fishes such as salmon, reproduction and migration gets affected. Radioactive substance grazing animals concentrate substances like strontium-90 by ingesting it through grass and forage. Likewise ducks and rabbits also ingest isotope like phosphorus 32 and iodine 132 and are affected adversely. And fluoride accumulates in bones of both livestock and wild mammals.

Effects on Humans: Some fatal diseases as a result of severe air pollution, have been caused in persons subjected to occupational hazards such as black lung disease and asbestosis.

Effects on climate: The world wide problems of air pollution involve contamination of the upper atmosphere and the alteration of weather and climate by air pollutants. Many gaseous pollutants affect the penetration and absorption of sunlight. Thus reducing the solar radiation at Earth’s surface produces the cooking effect on world’s climate which could ultimately trigger another ice age. The increases amount of carbon dioxide causes an increase in the temperature of earth. This may cause droughts, heavy rains and floods. The supersonic jets and jumbo jets fly at high altitudes and release exhaust smoke which spreads like thin clouds in air. The water vapours and suspended particles in such clouds react with sunlight to produce smog. 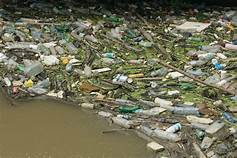 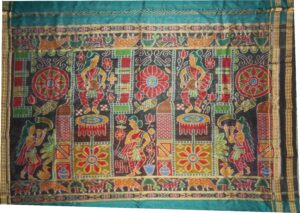